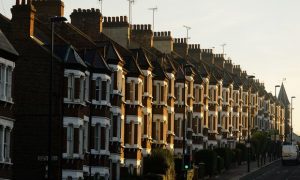 House price growth picked up slightly in August, despite the Brexit vote, according to Nationwide Building Society.

The average price of a home rose 0.6% to £206,145 between July and August, according to the Nationwide house price index (pdf) – one of two major monthly surveys by UK mortgage lenders. This compares with a 0.5% monthly gain in June. The annual rate picked up to 5.6% from 5.2%.

Nationwide said both demand and supply had been weak, adding that the outlook for the housing market remained clouded. Recent figures from the Bank of England showed mortgage approvals fell to an 18-month low in July.

Robert Gardner, Nationwide’s chief economist, said: “The pick-up in price growth is somewhat at odds with signs that housing market activity has slowed in recent months. New buyer inquiries have softened as a result of the introduction of additional stamp duty on second homes in April and the uncertainty surrounding the EU referendum. The number of mortgages approved for house purchase fell to an 18-month low in July.

“However, the decline in demand appears to have been matched by weakness on the supply side of the market. Surveyors report that instructions to sell have also declined and the stock of properties on the market remains close to 30-year lows. This helps to explain why the pace of house price growth has remained broadly stable.”

He said the outlook for the housing market depended to a large extent on what happens in the job market along with confidence among potential buyers. Business surveys suggest that the manufacturing, services and construction industries all slowed sharply in July, which if sustained is likely to have a negative impact on the labour market and consumer confidence.

The Bank of England’s recent stimulus package, including an interest rate cut to a new record low of 0.25% on 4 August, should provide some support for households and the housing market. However, Gardner noted that the proportion of mortgage balances on variable rates was lower than average at present (45% versus an average of 60% since 2001) and the typical saving from a quarter-point cut in interest rates is about £15 a month.

The Bank’s decision to buy an additional £60bn of UK government bonds will put downward pressure on long-term interest rates, which will, in turn, help to lower the cost of fixed rate mortgages, which have already declined to new all-time lows, he added.

Samuel Tombs, chief UK economist at Pantheon Macroeconomics, noted that the Nationwide data was “incongruous to all the other noises from the housing market”. For instance, the net balance of surveyors reporting that prices increased over the previous three months slumped to +5 in July, from an average of +36 in the first half of 2016, according to the Royal Institution of Chartered Surveyors. The Nationwide measure is based only on the lender’s mortgage offers, so it is susceptible to sampling issues, he said.